Working Outside of Durham’s Black Businesses

Most of the policyholders and patrons of Black Wall Street did not work there, nor in the black business district of Hayti. They worked at great risk on the other side of the veil—in white Durham. They labored for low wages in white households and in tobacco fields and factories.

Yet, to succeed, Durham’s black middle class and their businesses relied on the dollars and support of their poor and working-class neighbors. 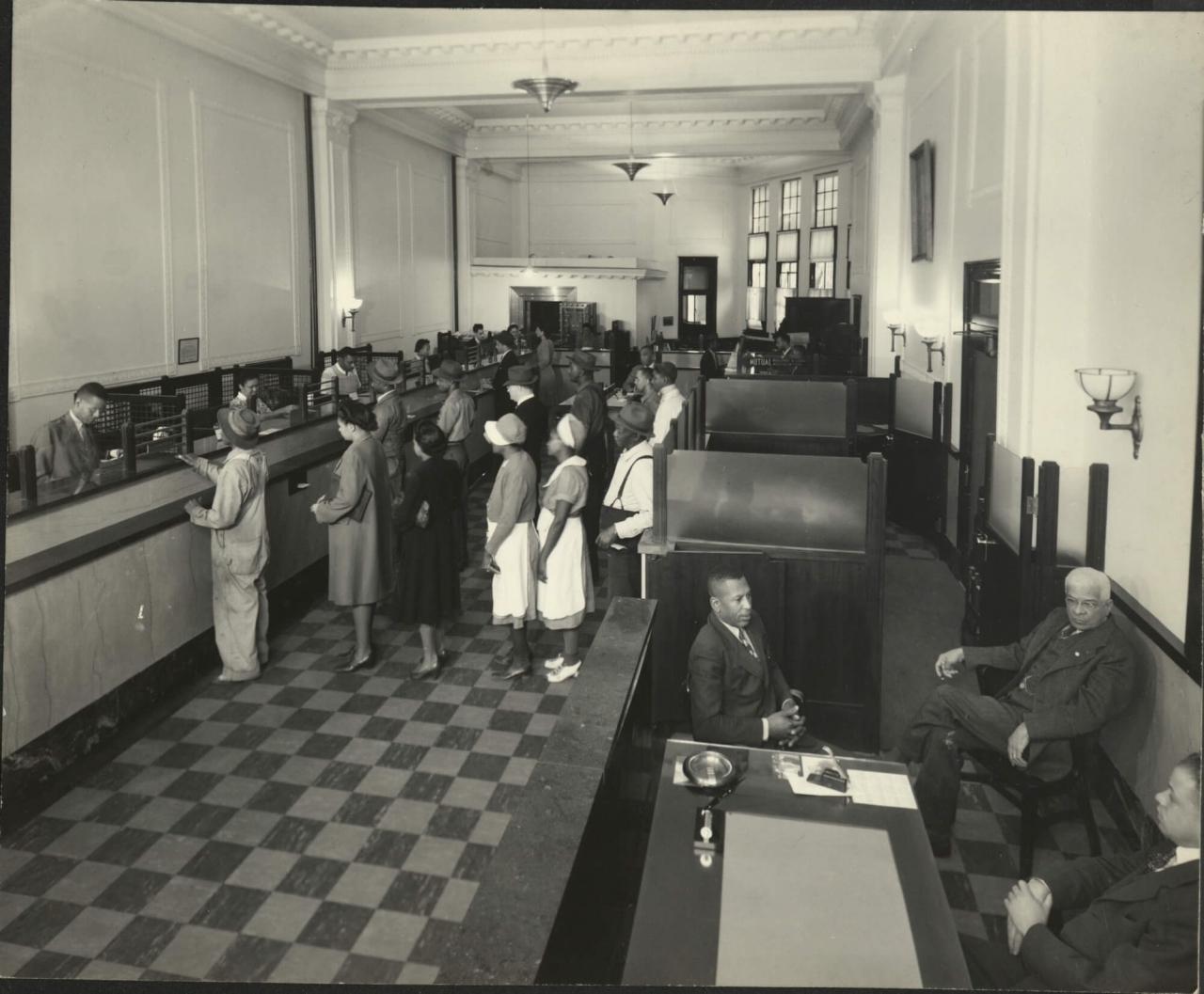 For workers like Dora Scott Miller, a bank loan meant a lifeline during crisis, and a life insurance policy meant “peace of mind” that they would be able to die in dignity.

No benefits, nothing but just a little insurance when you was deceased.

Shift change at Liggett & Myers Tobacco Company, ca. 1930. Tobacco workers either took a segregated bus or walked from their neighborhoods to work at white-owned companies like this one. 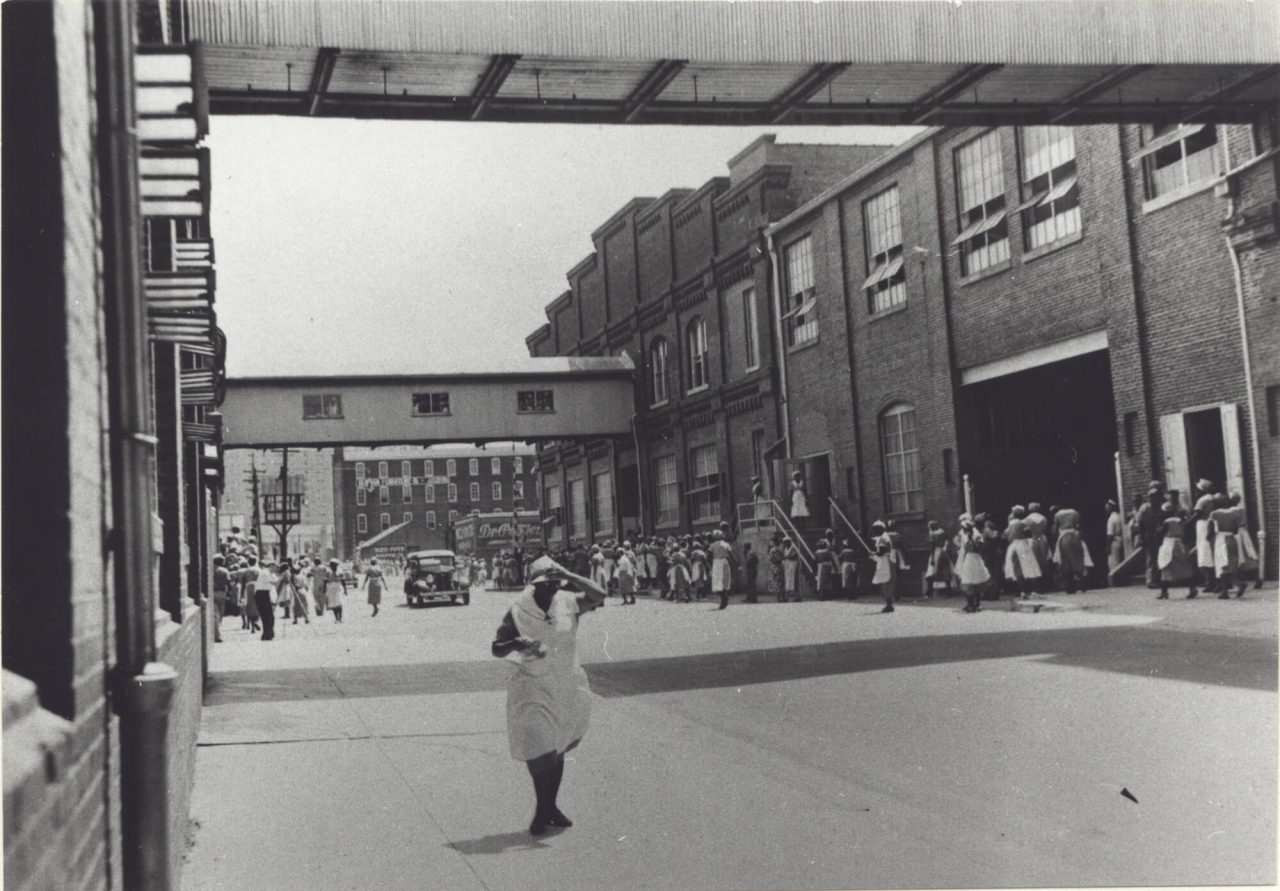 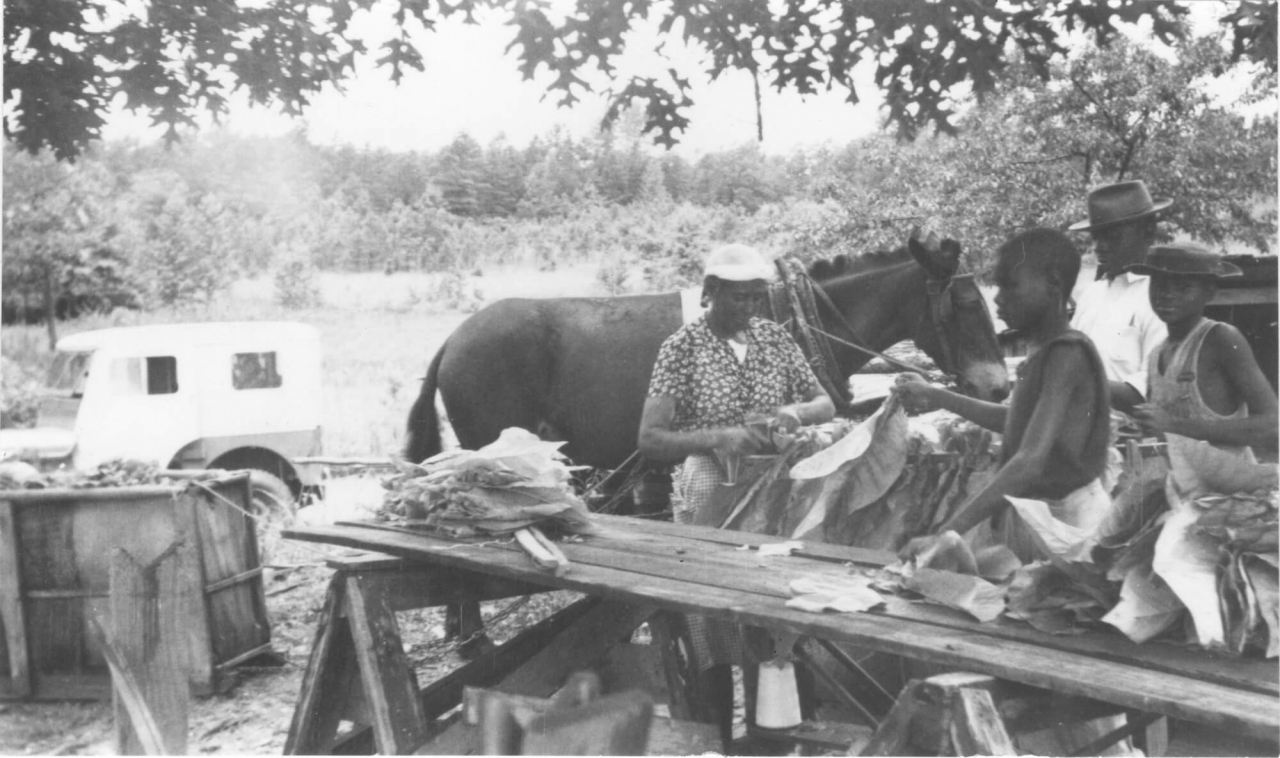 After emancipation, Minnie and Ephraim Hart, pictured here, sharecropped on the same Durham plantation they worked on while they were enslaved. For generations, many families had no other choice, trapped in a cycle of debt to white landowners. 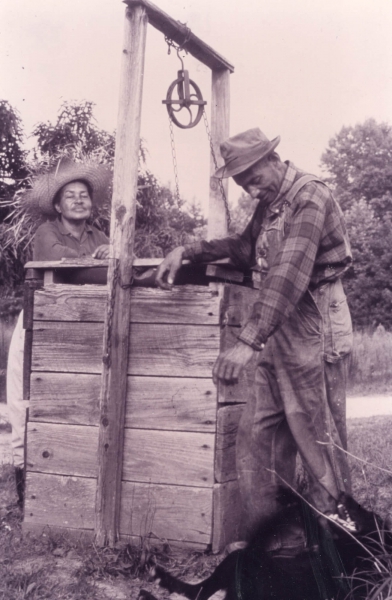 Workers stemming tobacco in Durham, ca. 1940. Stemming was one of the most dangerous jobs in tobacco due to direct contact with the leaves. Most black women in tobacco factories worked as stemmers for the lowest wages. 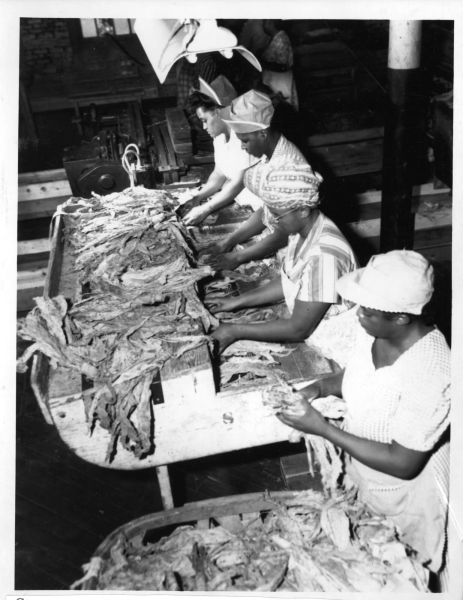 Doing laundry in the Brookstown neighborhood, ca. 1930. Taking in laundry and doing domestic work in white households was a major source of employment for women in Durham’s black neighborhoods. 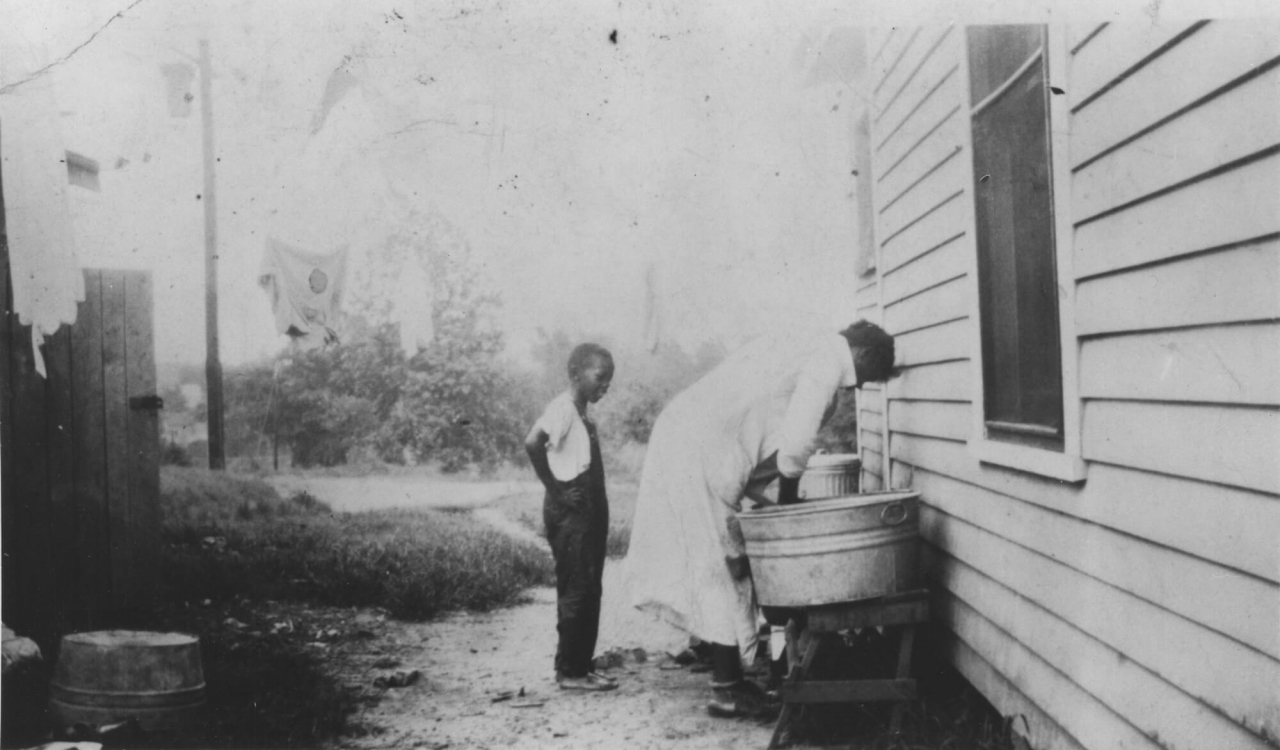 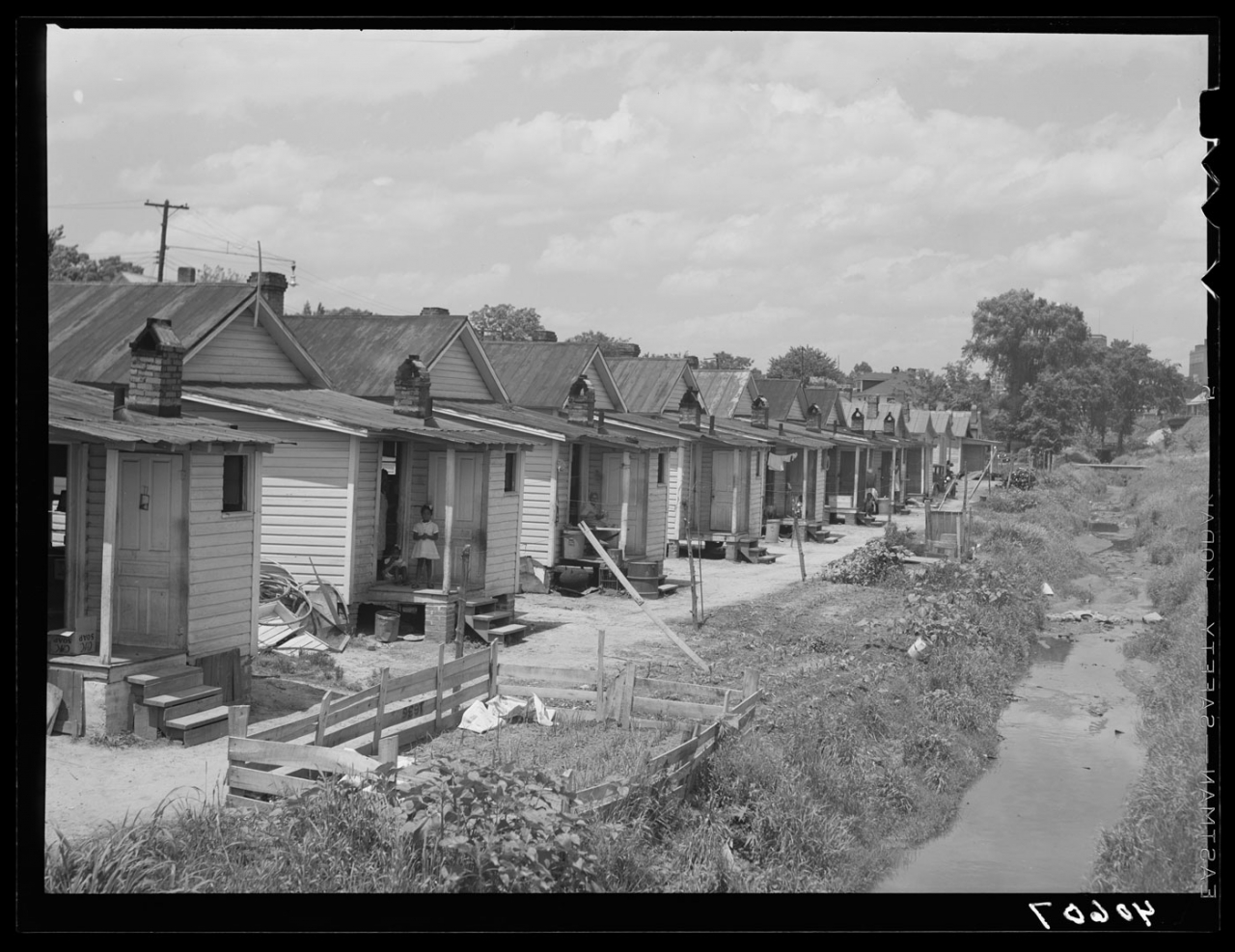 Life insurance policy for Georgianna Pine, who died at the age of one, in Durham, 1912. 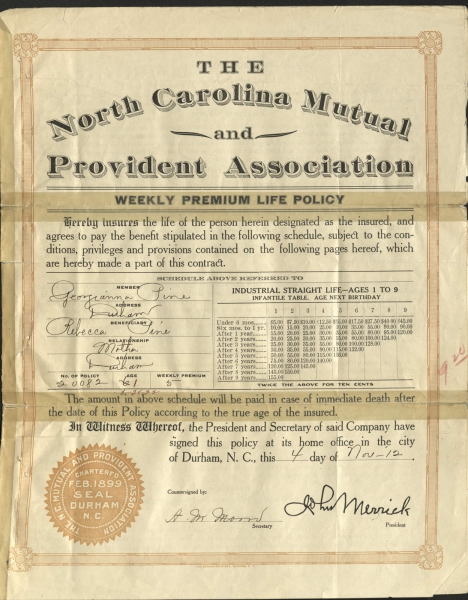 Insurance policies provided family members with funds for burial expenses and maybe even something extra to help them cope after losing a loved one. 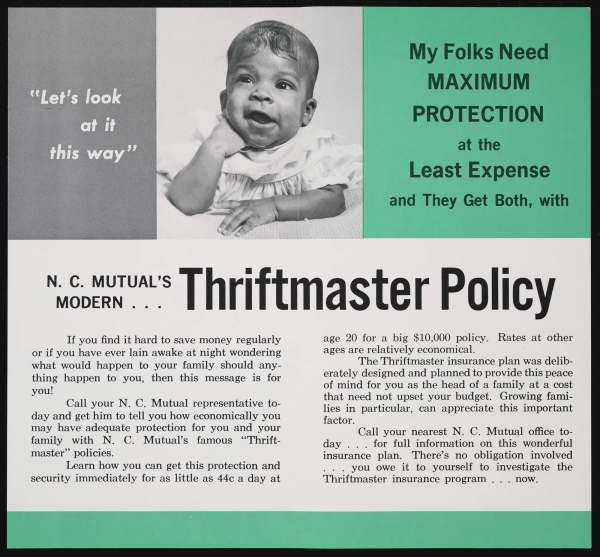 The Fayetteville Street bus line that went through the Hayti neighborhood, ca. 1930. Many Hayti residents chose to walk to work instead of taking racially segregated public transportation. 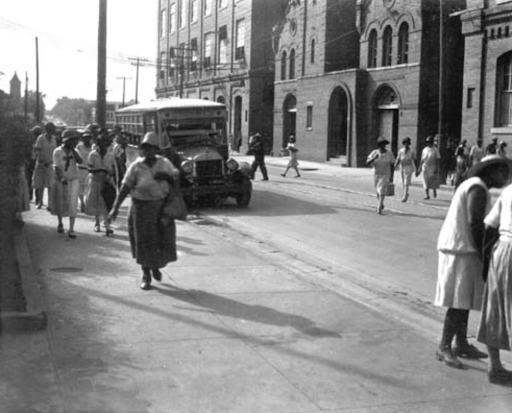 Durham, near downtown, 1940. Once outside of their neighborhood, black residents faced the violence of white Durham during Jim Crow—especially those who worked outside of Black Wall Street or Hayti. 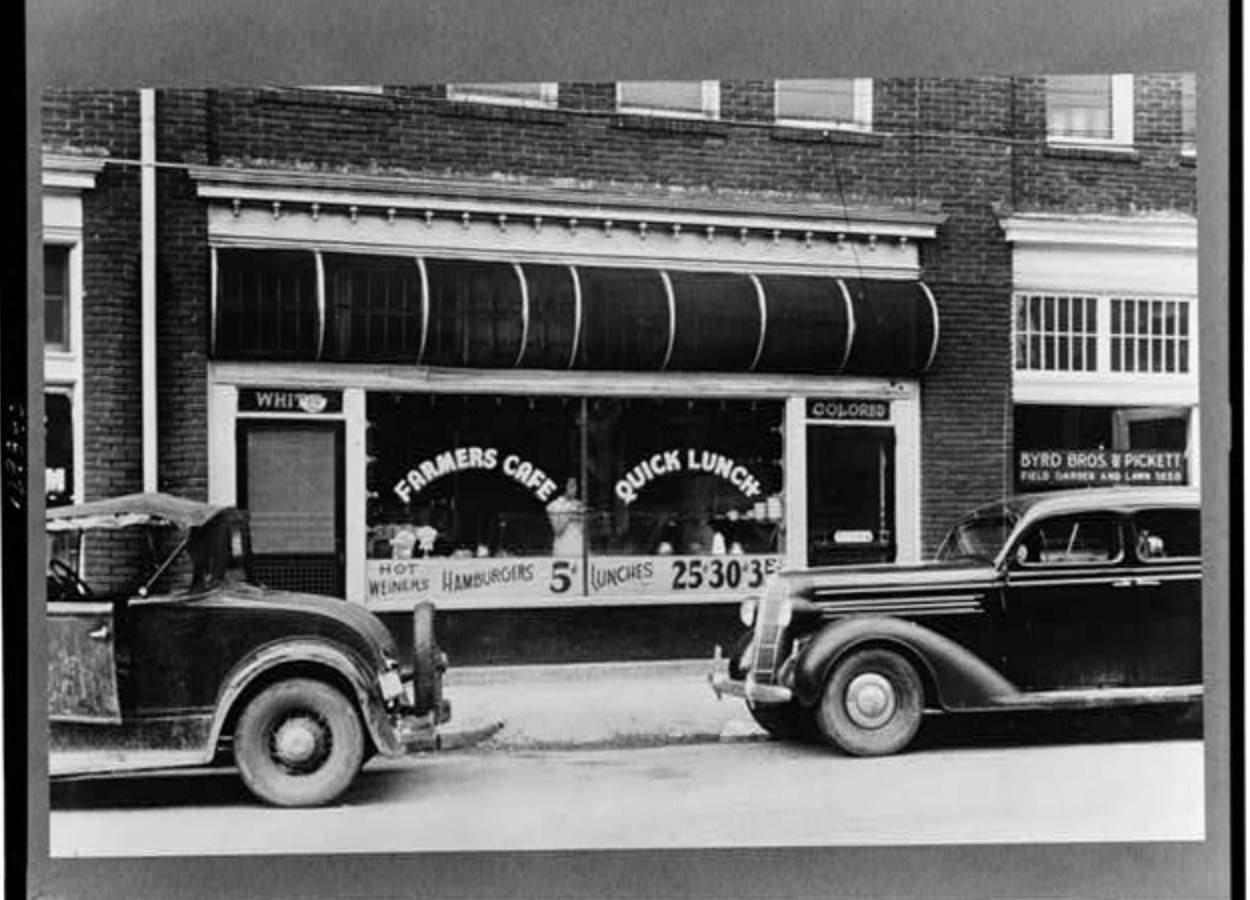 Originally from Durham, Theresa Jan Lyons left rural life to embark on a career at the NC Mutual. Her grandfather was enslaved at the Stagville Plantation, north of downtown Durham. Her older family members had little choice but to stay and work there after emancipation.

Listen to her memories of taking the bus in Durham during segregation.

Theresa Jan Lyons: [Part 2, Begin 00:03:16] It was still segregated. The Fayetteville Street area was where most of the black people lived, or either the Walltown or what they call Hickstown area. It’s back that way. That’s where a lot of the black people lived. It was just segregated, and we knew our place. We’d get on the bus and we’d go to the back. But, now, on the Fayetteville Street bus, since only black people lived down there, you could sit anywhere. But if a white person got on the bus—there was one white family that lived way down Fayetteville Street, and I remember that man used to ride the bus all the time, and he would always sit right behind the driver, just the one white man. If somebody was sitting there and he got on, they got up. They would move to let him sit there because they had a big sign at the front of the bus that said, “Coloreds Sit From the Rear; Whites Sit From the Front.” [End 00:04:13] 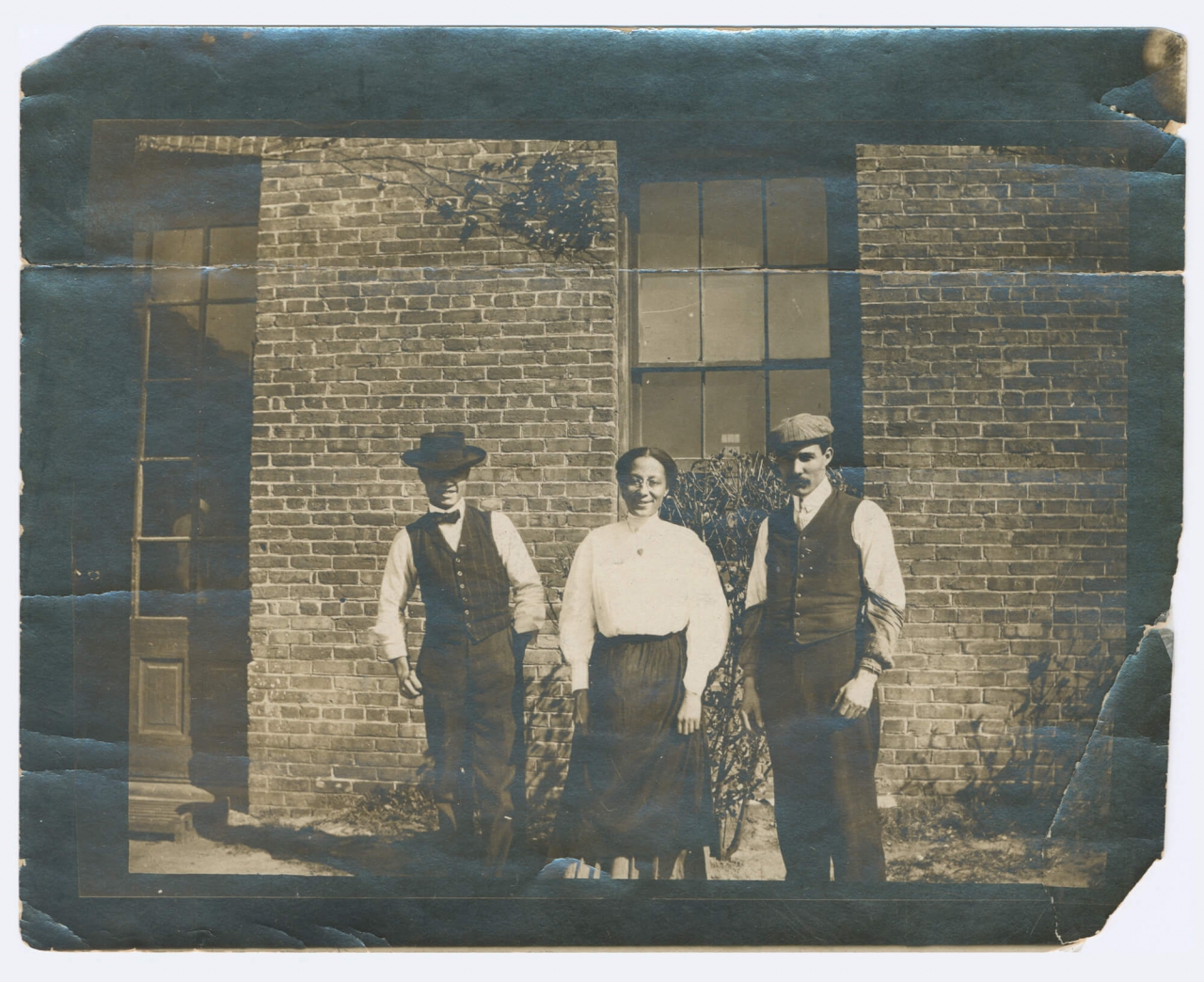 The staff of The Daily Standard, the black-owned newspaper of Wilmington, North Carolina, ca. 1890. White vigilantes burned down the newspaper’s office and ran its staff out of town during the 1898 Wilmington Massacre.

Alexander Rivera was a photojournalist who came to Durham in 1939 to become the founder of the News Bureau at today’s North Carolina Central University.

Listen to his story about the impact that the Wilmington Massacre had on his father, who lived through it.

Alexander Rivera: [Begin 00:02:42] “My father would be considered now a radical because, and I never knew what his interest was until later in life. He—at fourteen years of age, he and his family were run out of Wilmington, North Carolina, during the Wilmington Riot. Yeah, and that affected him. Of course, it affected his father, too, because his father was a very prominent undertaker. When he was run out of Wilmington in the Wilmington Riot of 1898, he never got over it. I mean, his father never got over it, and I’m sure he didn’t either because he became very race-conscious. He was a representative of the NAACP in Greensboro. I say that to say that I met—as a boy, a little child—I met all of the NAACP representatives, Walter White and William Pickens and James Weldon Johnson, and all those people, because to belong to the NAACP was almost a sure loss of a job. With him being professional, he didn’t have any job to lose. So he didn’t worry about it. [End 00:04:20]

Theresa Jan Lyons, a former NC Mutual employee, on growing up in a family of tenant farmers and working in tobacco fields.

Blanche Scott, a former employee at Durham’s Liggett & Myers Tobacco Company, on starting work in the factory as a child.

Theresa Jan Lyons: [Part 1, Begin 00:03:23] But, you know, back during the time when we lived all over the area because we were tenant farmers—very poor, living on the land of the owner, who was, of course, white. We used his mules, and he paid for the seed and the tobacco and the stuff that we planted. Of course, as I look back now, I know how they cheated us, because we never had anything. I went to school with shoes with holes in the bottom, where I had to put cardboard, because even though we would go sell the tobacco—and I’d be so excited, I was thinking I was going to get some new clothes—there was nothing left, because after he took his share, and he was counting, there would be nothing left but maybe a little bit to buy some flour and some sugar and stuff like that. [End 00:04:15]

Blanche Scott: [Begin 00:16:42] “It was a different type of tobacco that they worked in; the tobacco was called burly tobacco. It was very strong. If you had eat anything when you go there in the morning, it would get on down inside of you and make you so sick. That’s one grade of tobacco I never did get used to all them twenty-four years that I worked there, I never did get used to it. When it would get on me, I had to turn my nose up. I’d take an orange peeling and hold it in my mouth, and that would keep me from getting sick. I never could stand that burly tobacco.” [End 00:17:11]

Blanche Scott: [Begin 00:00:27] My parents came here from Winston-Salem. My mother’s native home was in Winston-Salem; my grandmother’s home was in Atkin County. So they came to Durham doing the work that he did in Winston-Salem, was in factory work. My father, he was a tobacco roller in Winston-Salem. Then they decided they would come to Durham. So they came here to Durham, and they was employed at the American Tobacco Company. They worked there for so long, then they went to Liggett and Myers. In the meantime, I was born in 1906. And well, as I grew up, you see, they used to let children go to school and work in the evening when they come from school. Yeah, I used to go to West End School. I’d get out at the time we’d normally get out at 1:30. I’d come from school to the factory and worked from 2:00 until 6:00.

[So you began work as a child?]

As a child. I would work like that during the school term, and then in the summer, they’d let the children come and work all day until 4:00. You’d come in the morning at 7:00, and then we’d get off at 4:00 and go home, and that leaves the adults working.

[How old were you when you began working?]

worked like that until I got old enough that I could work all day. In the meantime, I went to

Dora Scott Miller: She was asked by the interviewer if she was given any kind of benefits in the 20s and 30s. [Begin 00:22:12] “Nothing but just a little insurance and that was—when you pay, that’s when you passed. We didn’t have no hospital insurance. Hospital insurance didn’t come about till some years later. No benefits, nothing but just a little insurance when you was deceased. I think got around three or four hundred dollars, something like that, to start with.” [End 00:22:30]

Dora Scott Miller: Interviewer asked her about the hardest part of working in tobacco—was it emotional or physical or both. [Begin 00:24:57] “The emotional strain was on them hand stemmers, ’cause they was just like this, they shut their body—emotional. That was the hand stemmers; they went just like this here all day long. They had to do so much ’cause they got paid by the pound. The emotional strain was on the hand stemmers; they weren’t gettin’ but about eight cents a pound. They had to get so many pounds, then the man would fire you.” [End 00:25:22]

African American women stemming tobacco in a factory, a task relegated to women of color. 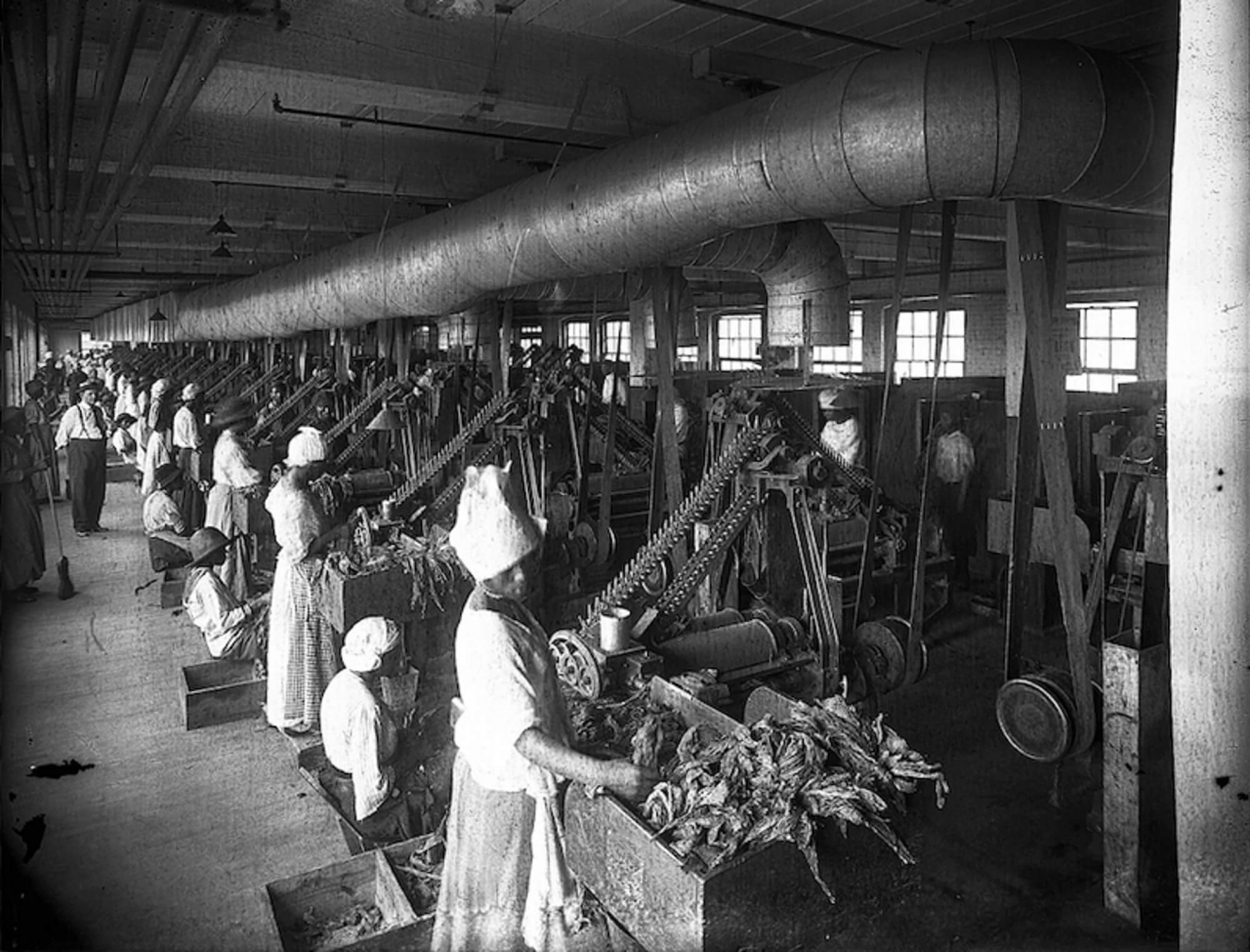