The Destruction of Hayti

A protest march against Urban Renewal in Durham, ca. 1970. The NC Mutual building is in the background, beyond the bulldozed remains of the Hayti neighborhood and business district. They are marching over the new Durham Freeway, which added to the destruction of Hayti. 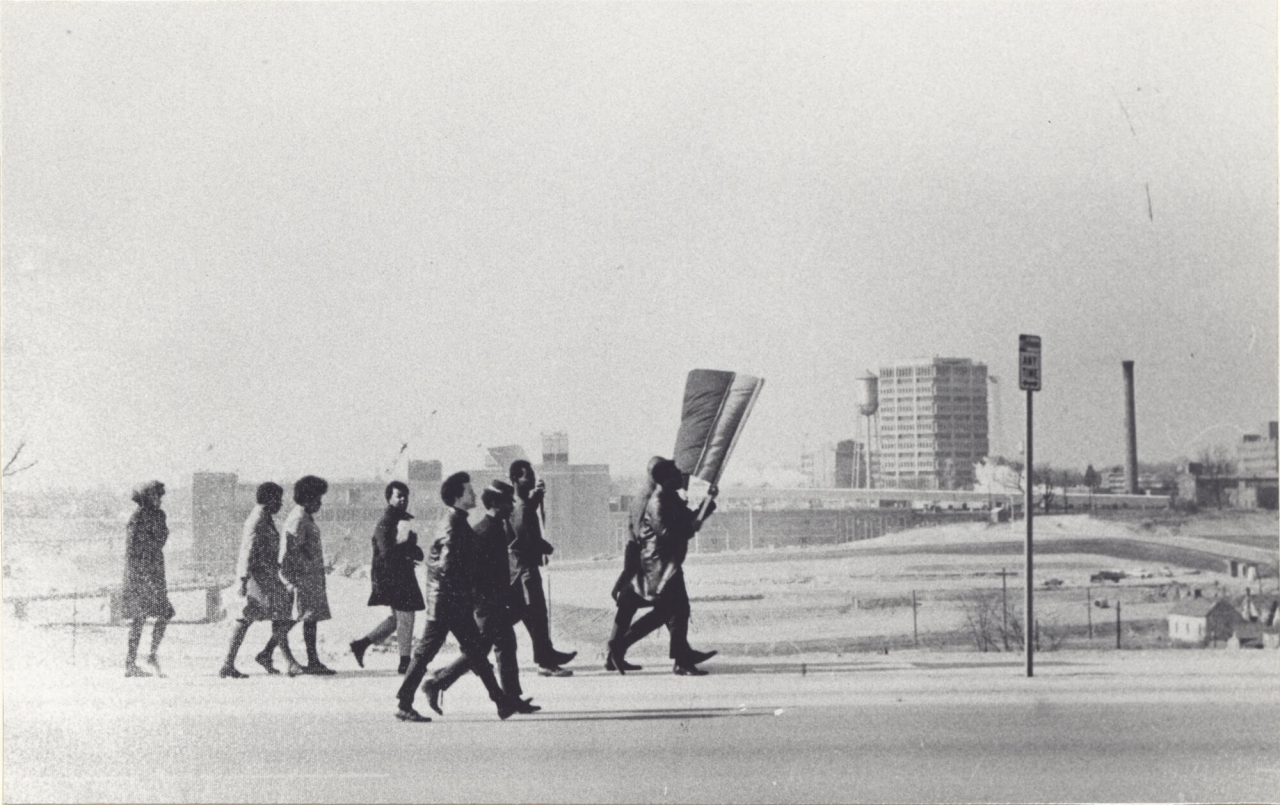 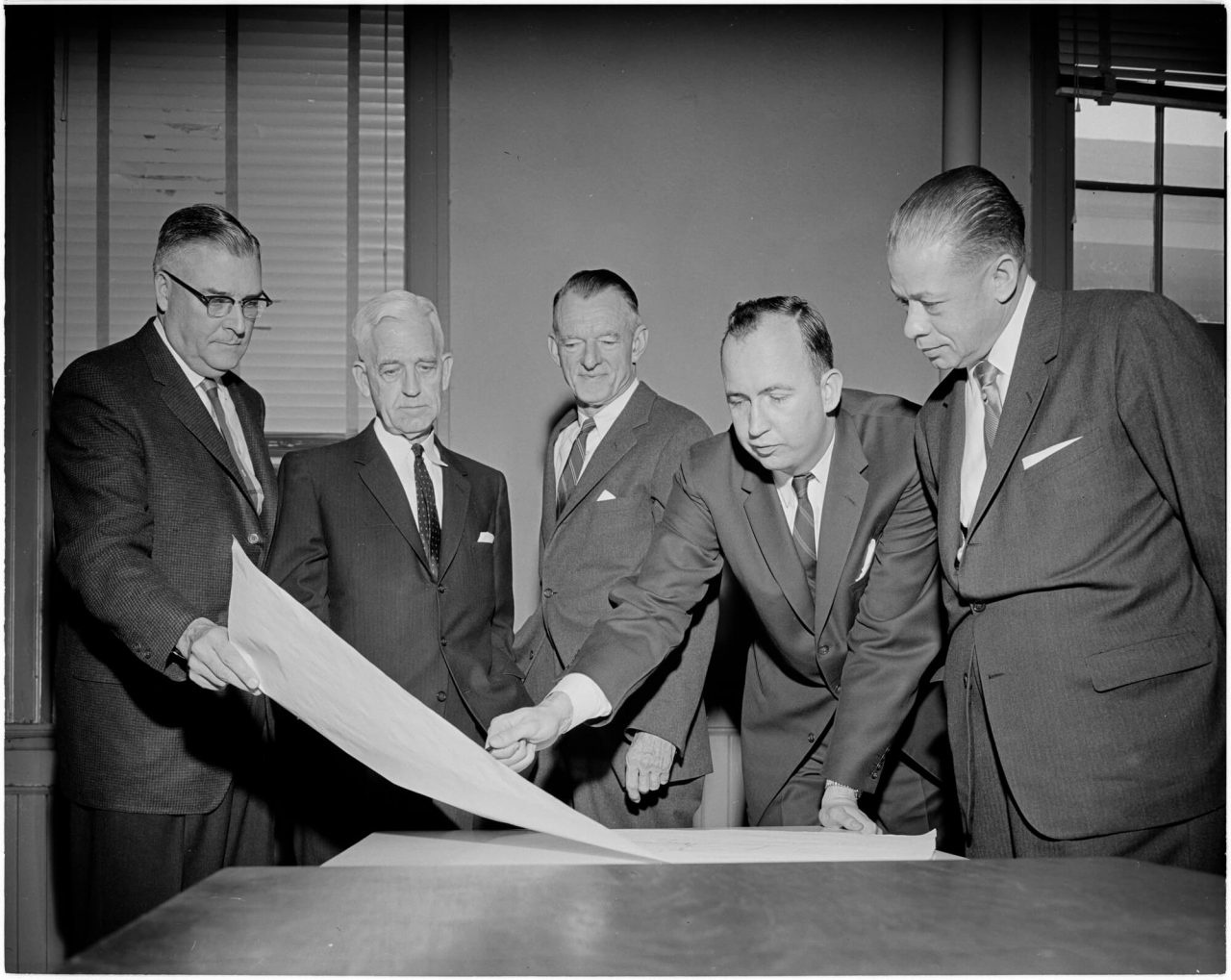 Durham failed to deliver on its promises to rebuild. It demolished at least 120 black businesses and displaced over 500 families. With Hayti’s homes and its business district gone, hundreds more lost their businesses in the years that followed.

Durham Business and Professional Chain flyer for a meeting to answer black business owners’ questions about Urban Renewal. The City of Durham promised the black community that homes and businesses would be restored and improved, prompting middle-class community leaders to support the plan. 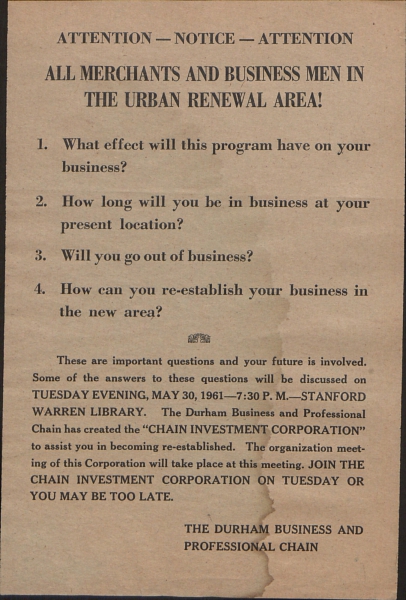 Black business leaders like NC Mutual President Asa T. Spaulding helped bring the Urban Renewal program to Durham. They believed that it would provide funding for physical improvements to their community. With the Durham Committee on Negro Affairs, they recruited over ninety percent of black Durhamites to vote for it during a public bond referendum in 1962. 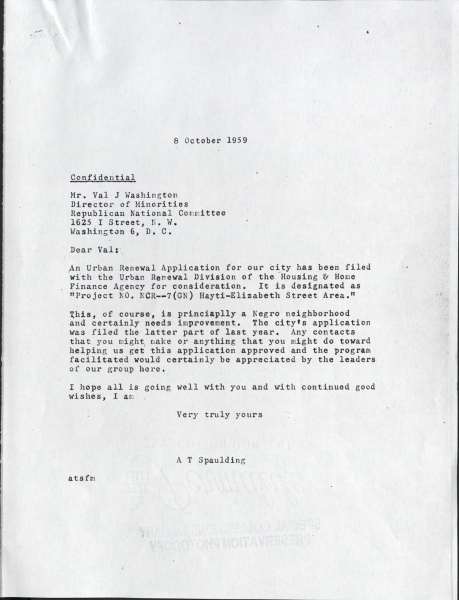 Announcement of the route of the Durham Freeway through Hayti, 1959. 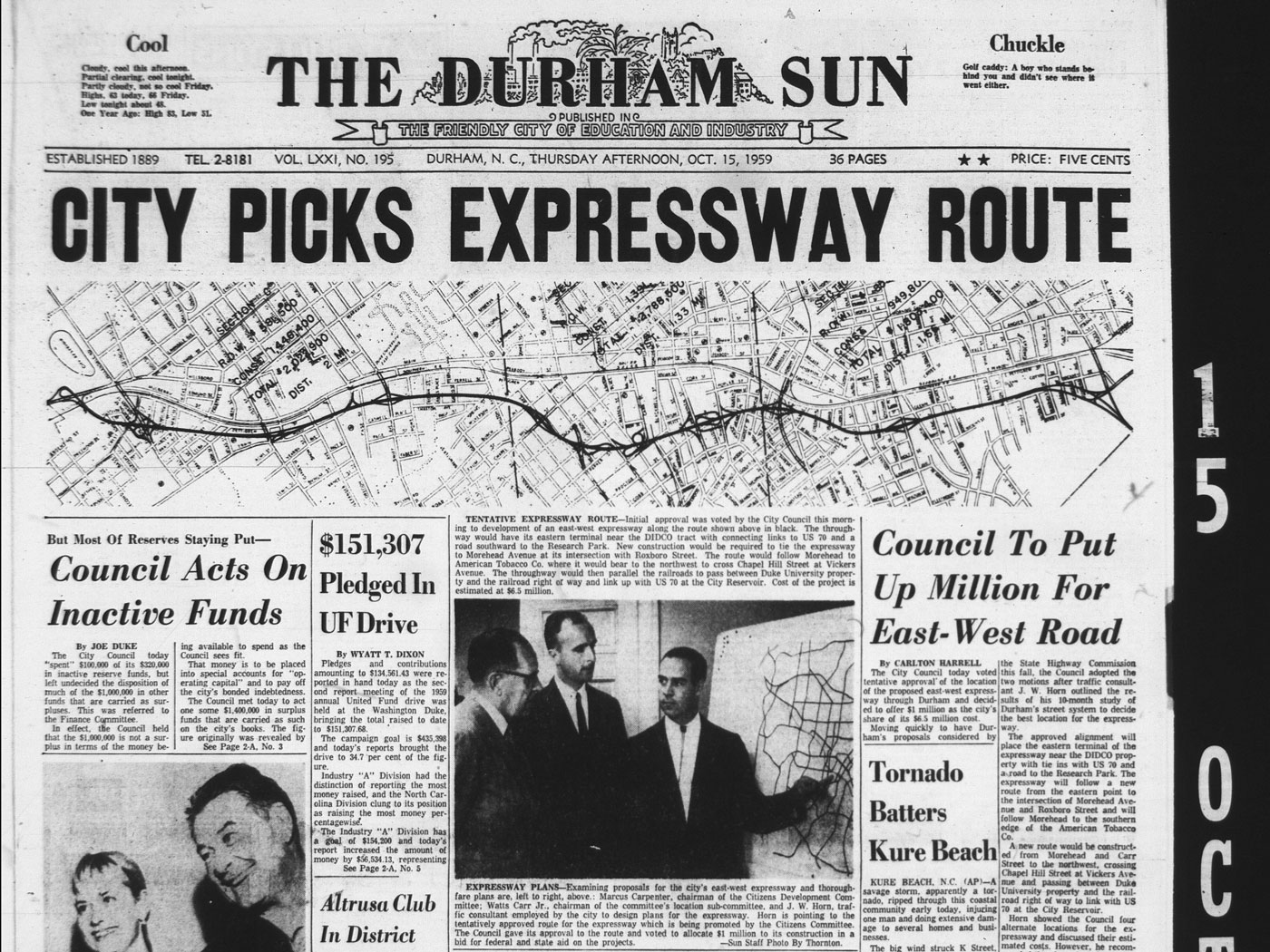 Lawrence Ridgle, a military veteran who grew up poor on Fayetteville Street in Hayti, on the reasons why many Hayti residents originally supported Urban Renewal and the building of public housing.

Nathaniel White, owner of Service Printing Company in Hayti, on how business owners bore the cost of losing their buildings to Urban Renewal.

Margaret Kennedy Goodman, X-ray technician at Lincoln Hospital and the child of an NC Mutual executive, on losing her childhood home on Fayetteville Street in Hayti to Urban Renewal.

Lawrence Ridgle: [Begin 00:58:22] In neighborhoods like this they put up the cinder block shacks and things they got down there. And believe it or not people had…a lot of people over there in the wintertime didn’t have window glasses. Their roof leaked, holes in the floor, and they put them in a sound house. So they felt better. Then they started building projects. And I think they built McDougald’s in the fifties. And people hadn’t had tile floors, a bathroom, heat on the wall, you know. And really they thought they were really getting something, you know. Urban Renewal was good, they thought. [End 01:59:19].

Nathaniel B. White [Part 3, 00:24:04]: “Well, I think we got something like $32,000 for our business. Now, if what you really need is what the…when you’re building a highway, either a freeway or something like that and you need property to build it, what you really need—as I look back on it now—is replacement. In other words, if you’re going to drive a freeway right through my building, the only fair thing to do is to be able to replace that building. In other words, I ought to be able to move my equipment and everything into a building. If they do it like that, you will be able to stand the damage. Now, the Highway Department has a replacement clause in their building but the Urban Renewal has what they call “fair market value” and that won’t replace it. And that’s where the handicap comes. You’re building a road and you put the burden on the property owner to replace his property rather than…just say you give him $32,000. That probably would have maybe have bought the land or whatever, but it wouldn’t put the building back and everything like that.” [End 00:26:29]

Margaret Kennedy Goodman: [Begin 00:05:32] My father was in the Army when I was born and that’s why I was born in Clarkton. And when he came home, they moved to Durham. He was working for the North Carolina Mutual Insurance Company, and the home office was here. Before he was…he lived in Savannah, Georgia, but I don’t remember anything up there. And they brought him here to the home office. In 1920, we moved to Durham End [00:06:10].

Margaret Kennedy Goodman: [Begin 00:06:22] We lived first on Piedmont Avenue, which ran off of old Fayetteville Street. It’s just, that area’s just not there anymore. And, my father bought the house on Fayetteville Street we moved in, which was a small house. Being the son of a carpenter, he just added rooms as he…as we needed them. And it eventually turned out to be a seventeen-room house. Um, as I say 1008 Fayetteville Street. Brick front, had a big front porch, which I loved. I’ve always loved watching people. And I was devastated when Urban Renewal came. I just didn’t see why we had to move from our Fayetteville Street house. // END But we did, and this house was available. [End 00:07:33]

A City of Durham plan for Hayti after Urban Renewal, 1960. 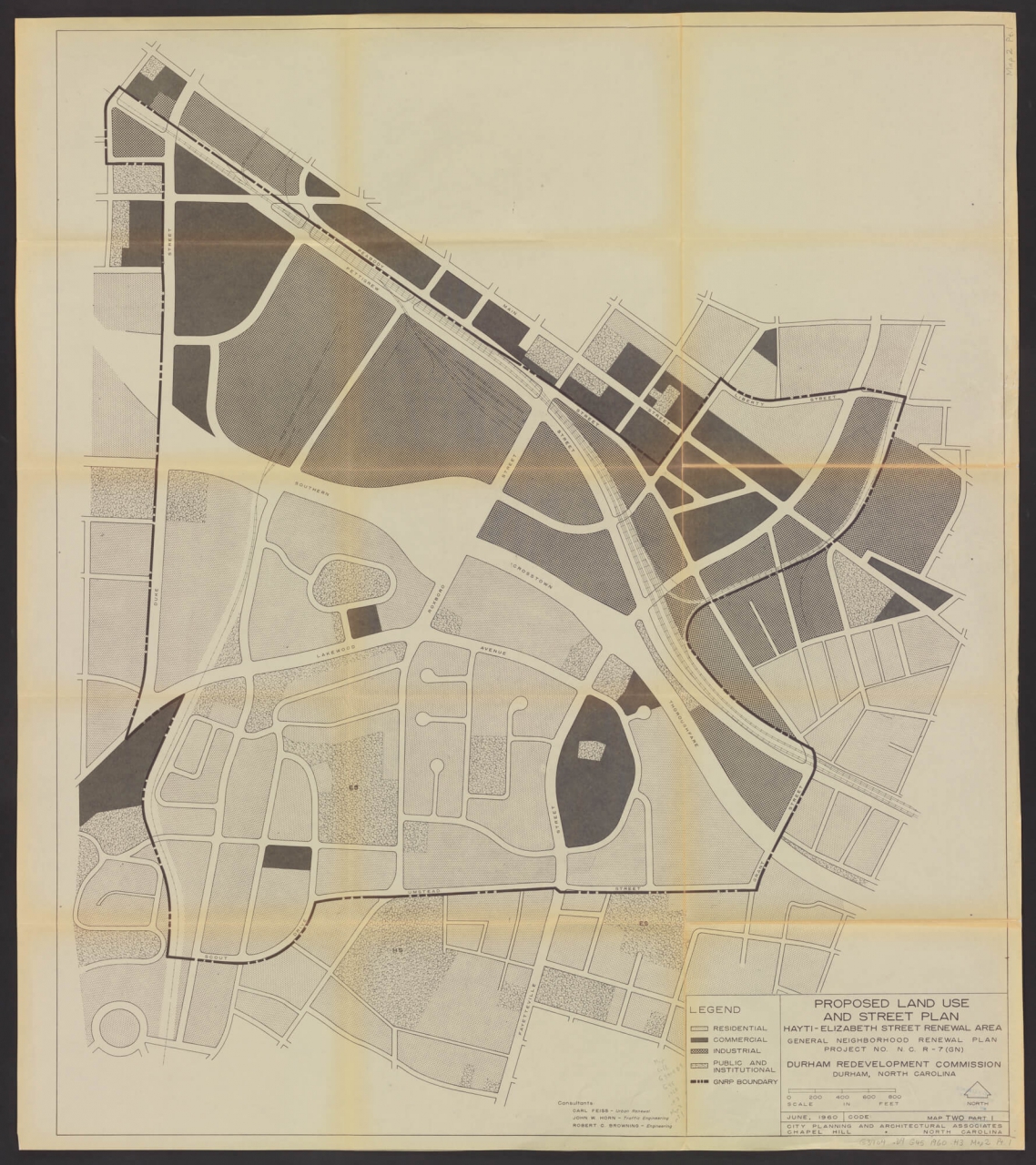 A City of Durham plan showing a map of Hayti before Urban Renewal, 1960. 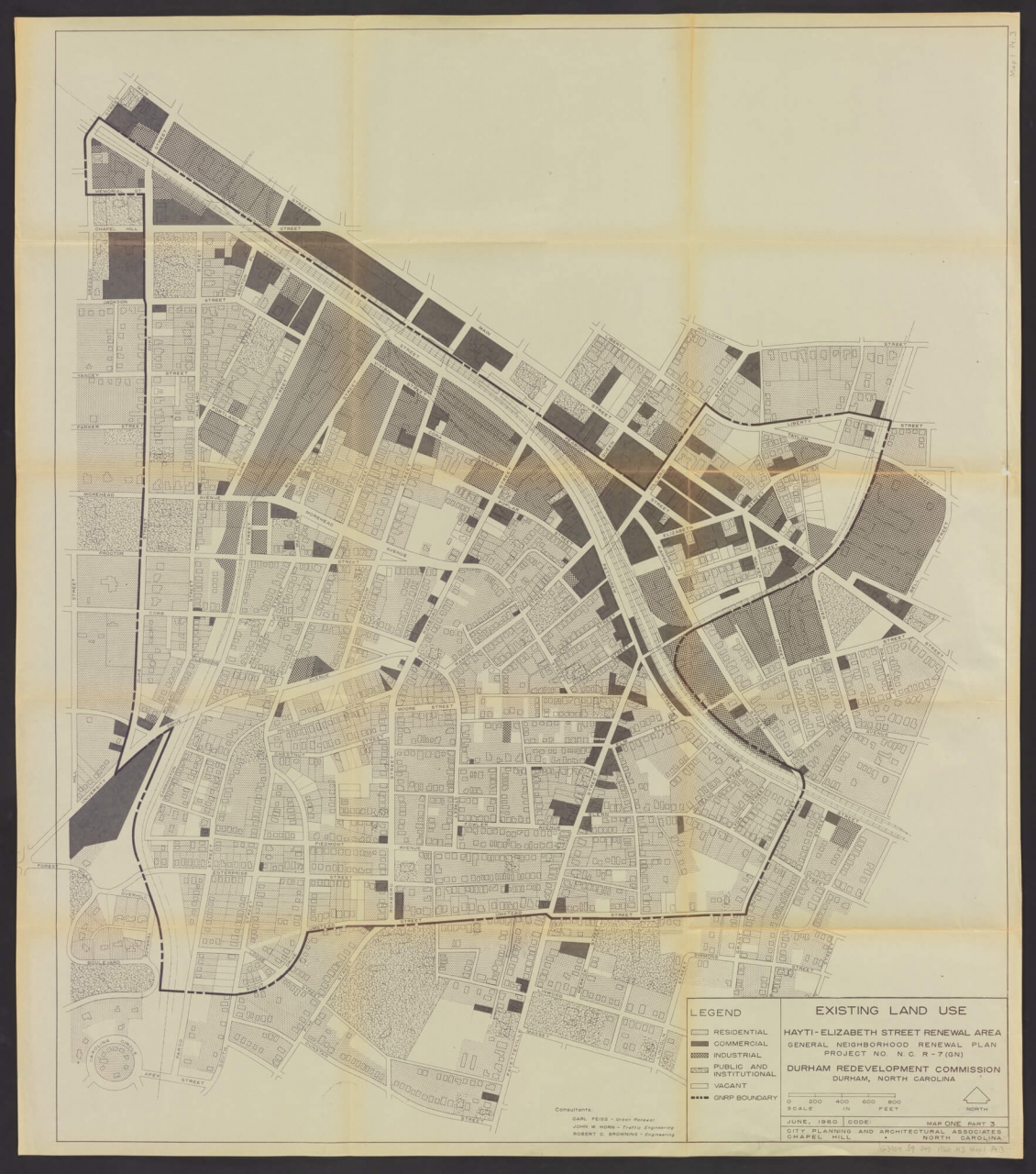 The Road Ahead
Scroll to top