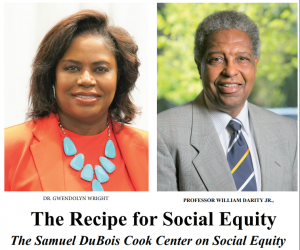 The Samuel DuBois Cook Center on Social Equity (SDCSE) is
Duke University’s leading major research locus with a focalization on
the dilemma of inequality. Professor William Darity Jr., the founding
Director of the Samuel DuBois Cook Center on Social Equity, has
prepared a recipe for social equity. “While economic inequality is
of paramount importance, it is also vital to have a center that does
systematic research on the problem,” says Darity. The recipe for
social equity includes a researched delineation of remedies for the
immense degree of inequality that exist, targeting 5 major areas: (1)
inequality associated with employment (2) education (3) wealth (4)
health (5) and political participation.
Dr. Gwendolyn Wright has been at Duke for the past 19 years
with variegated responsibilities. Not only does she take the lead in
administrative functions of the center, but she is the creative voice
in the center. Wright has been with the SDCSE since its inception,
established in 2014 entitled the Consortium on Social Equity, but
later approved in 2015 by the Duke Board of Trustees to be renamed
to honor Dr. Samuel DuBois Cook.

Urban or rural, black lives in NC are being cut short almost before they be...
Scroll to top