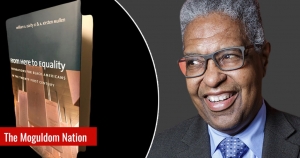 The book publisher for reparations advocate William A. Darity Jr. has decided to release his latest book earlier than initially planned.

“From Here to Equality: Reparations for Black Americans in the Twenty-First Century,” written by husband-and-wife team Darity and A. Kirsten Mullen. It’s available via eBook for $21.99. The hardcover book will be published in April 2020 and will cost $28.

In the 424-page book “From Here to Equality,” the two writers confront racism and discrimination head-on. In the process, they “make the most comprehensive case to date for economic reparations for U.S. descendants of slavery,” according to publisher The University of North Carolina Press (UNC Press).

Darity and Mullen paint a bleak picture of the intergenerational effects of white supremacy on Black economic well-being, which they use to measure the inequalities due to slavery.