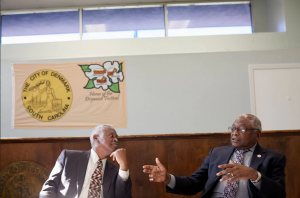 Daniels, the reparations advocate who helped manage the Rev. Jesse L. Jackson’s 1988 presidential bid, which made the call for reparations a central plank, said he has been surprised the debate has gained as much traction as it has in the 2020 Democratic campaign.

“The reparations conversation is happening in a way that I would not believe I would see in my lifetime,” said Daniels, 77.

The remedy, though, should be defined and administered by black people, he said: “A lot of people want to call everything reparations. But reparations should be race-specific because the injury was race-specific.”

William Darity Jr., a Duke University professor whose research focuses on the economics of reparations, said Clyburn’s funding formula “does not begin to qualify as a reparations program” because it does not ensure black wealth accumulation to address pervasive economic inequality.

“It’s a way of ducking the question,” he said.

Embodied: The Long Drive To Safe Birth in NC

Duke Immerse in Hawaii: Travel and First Day at Manoa
Scroll to top