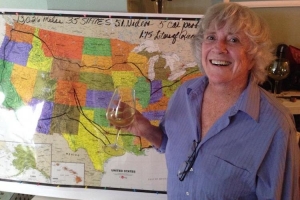 Shaking up the status quo

She’ll be stopping in places like Durham, NC., to talk with William A. Darity, Jr., professor of public policy at Duke University, and a leading scholar on reparations for slavery, and Hakim Williams, chair of African American Studies and Director of Peace & Justice Studies at Pennsylvania’s Gettysburg University, who conducts racial healing workshops.

“Most people immediately think of money when reparations comes up, but I’m also talking about the concept of collective healing and atonement, with programs that would add resources to the local economy and colleges, workshops developed on healing race relations, and discussion of the slave trade, redlining, and prison incarceration among African Americans,” says Roberts.

When she arrives out west in places like Porcupine, SD, and Vinita, OK, Roberts will be looking at efforts underway to improve the economic condition of Native American Indian tribes. She’ll be speaking with Patty Gobert, loan administrator with Native American Community Development Corporation, which provides loans to seven tribes in Montana, and Chuck Hoskins, chief of the Cherokee Nation, who led the effort to seat a Cherokee delegate to the U.S. House of Representatives for the first time.

HOW WOULD REPARATIONS FOR AFRICAN AMERICANS ACTUALLY WORK?
Scroll to top