The Plunder of Black Wealth in Chicago 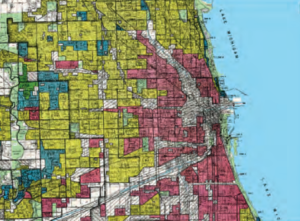 Economic expansion in the United States after World War II has often been credited with giving birth to a mass middle class. The G.I. Bill helped millions of veterans returning from war to secure higher education, jobs and healthcare, and a government-backed, low-interest, low-payment home financing system set vast numbers of Americans on a path to the financial security that came with owning a home.

From 1940 to 1960, the proportion of households that owned the home they lived in grew from 43 percent to 62 percent. But while White Americans had a government-assisted path to that dream of home ownership, but black Americans had a different experience. Federal policy and banking practices pushed black Americans into a secondary, unregulated market known as “contract selling” that often left them stripped of any wealth they had accumulated—or hoped to accumulate—through home ownership.

Consistently inconsistent: An examination of the variability in the identification...
Scroll to top