Making a Case for Black Reparations 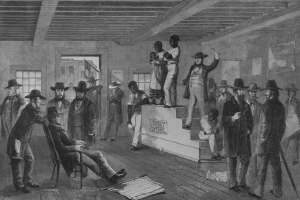 The topic of reparations in the United States dates as far back as the end of the Civil War and the Reconstruction era, but it has gained new momentum recently as the country grapples with centuries of racial inequity and Congress and the 2020 Democratic presidential candidates discuss how—and whether—to make formal amends for America’s history of racial inequality.

The controversial idea is based on the argument that the effects of slavery have spurred inequities for generations of black Americans—from the Jim Crow era to the present day—in areas such as housing, education, employment, and criminal justice, and that the descendants of slaves deserve some form of compensation, including financial payments. The US House of Representatives is currently considering the Commission to Study and Develop Reparation Proposals for African-Americans Act (H.R. 40), which would establish a committee to address what these reparations would be and how they would be distributed. The late US Representative John Conyers (D-Mich.), who died just last week, first introduced the bill in 1989, and again each year until he retired in 2017, but it failed each time. US Representative Sheila Jackson Lee (D-Tex.)  sponsored the most recent version.

Darity is a leading voice on reparations, and he testified at a House Judiciary Committee subcommittee hearing on H.R. 40 in June. “For too long the nation has refused to take steps to solve an unethical predicament of its own making—the problem of the unequal status of black and white Americans,” he said in his testimony. “A policy of reparations is a set of compensatory policies for grievous injustice.”

‘A Matter of National Responsibility’